The History Of Rosen Hyundai 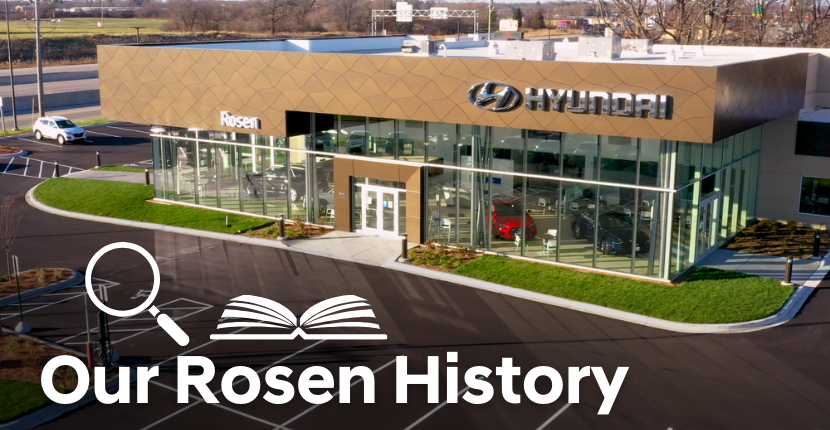 You have probably heard the iconic “Rawhide” inspired jingle over the thirty-plus years Rosen has been in business. Founded in 1989 by Saul Rosen, Rosen Motors started with a Nissan dealership on S. 27th St. in Milwaukee. Over the years since, Rosen Auto Group has expanded and become one of the premier auto groups in the Midwest. Rosen Auto Group has carried brands including Honda, Hyundai, Kia and more.

Scott Levy joined the team at its beginning in 1989. In 2002, he became Vice President and General Manager of Rosen Motors Group. Then, in 2015, he ascended to President of Rosen Auto Group.

In fact, Scott Levy’s Rosen Auto Group includes Rosen Hyundai of Algonquin, an early Hyundai store in the area opening in the late 1990s. Since then, Rosen Algonquin has served its community along with the surrounding area with an expansive inventory of new, used, and certified pre-owned vehicles. Dominick Logan has been leading the team at the dealership as General Manager since 2015. In 2017, Rosen Auto Group opened its Genesis of Algonquin dealership, offering luxury Genesis vehicles including the G70 and G80.

Rosen Algonquin has also been extremely involved in the community by participating in numerous charities and organizations. It is a member of the Algonquin Lake in The Hills Chamber of Commerce. Over the years, it has also supported causes including Hope on Wheels, Canines 4 Comfort, the Jesse White Golf Outing, and many more.

Recently, Rosen Auto Group opened a new Hyundai dealership location in Kenosha, WI. The Kenosha Hyundai store is a newly built, state-of-the-art facility, and it is managed by Josh Ihmoud. Josh grew up in Elmwood Park, IL and has been in the automotive industry for over 20 years. The Rosen Hyundai Kenosha dealership is excited to grow closer with the Kenosha community and serve them for years to come.

Looking for Hyundai dealers Kenosha? Rosen Hyundai of Kenosha serves residents of Southern Wisconsin and Northeast Illinois, including Waukegan, Pleasant Prairie, and Racine. Located at 6701 120th Ave. in Kenosha, WI, we pride ourselves on delivering the highest level of service and the best car buying experience possible. Rosen Auto Group has proudly served the residents of Illinois and Wisconsin for years, providing top-notch new and used car sales as well as auto service and parts. You can always count on Rosen Hyundai to provide the best sales and service experience in the area. Over the years, Rosen Hyundai has developed a sterling reputation because we care about our customers and strive for 100 percent customer satisfaction.